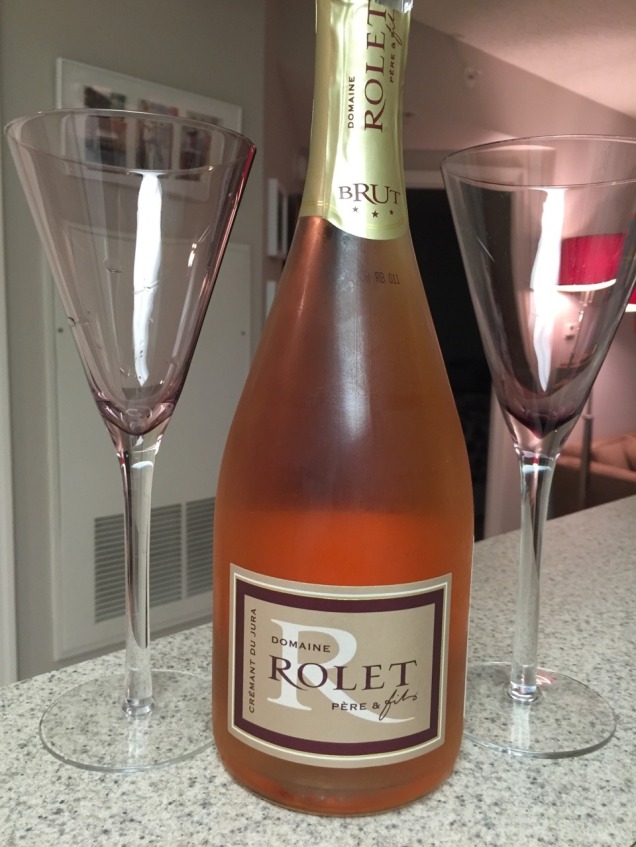 I found a fabulous everyday, bring-to-a-party, serve-at-a-celebration bottle of sparkling rosé. It’s a Domaine Rolet Père et Fils Crémant du Jura. And for about $22/bottle, I had no qualms about going back and buying a few more bottles (which I’ve now taken to almost every brunch or party I’ve attended for the past month).

It’s from Jura. That’s the French region southeast of Champagne recently described as what wine journalists talk about to gain some “counterculture street cred.” It was also the only bottle from Jura at a local shop. And while picking up some other wines, I bought a bottle out of curiosity.

I decided to serve it to a friend who came  over for a festive evening of cheese, meats and wine. The intention was to pour a glass to toast the evening and then move on to some red wines. That plan quickly changed, as we laughed, ate and chatted our way through the entire bottle.

When I brought it to a brunch the following week, a person at the table who declared she didn’t drink sparkling wines, refilled her glass a few times. That bottle was quickly diminished by the table, too.

Here’s what makes the wine worth your while (especially if sparkling wines aren’t your favorite): There are very little bubbles. Those that are there settle quickly and only provide a brief bit of effervescence in the background. It’s acidity balances the tart fruit flavors leaving a dry and crisp finish. While light in body, the fruit-forwardness of this sparkler gives it a solid elegance.

I haven’t decided if this will be my choice for new year’s eve, but I plan to be drinking this many times in the new year. Cheers to 2015!